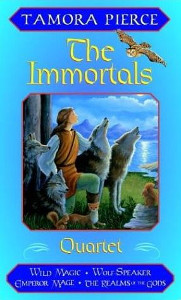 The Immortals is the second series set in the Tortall Universe. Veralidaine Sarrasri, more commonly called Daine, is a a thirteen-year-old girl on the run from her past. She has a "knack for animals" that borders on the supernatural, attracting the attention of Numair Salmalín, The Archmage of Tortall. As he instructs her, they realize that her power may be greater than either of them can imagine.

Meanwhile, a centuries-old barrier has been broken in the world. Fierce and mythical creatures known as immortals start to invade the human lands, and while many are benign, many begin to attack and prey on humans. Joining Tortall's efforts to deal with the sudden menace, Daine finds herself caught up in a conflict that spirals far out of the mortal scale.

Not connected to the 1995 action movie of the same name.

A character sheet can be found here. Beware of spoilers.