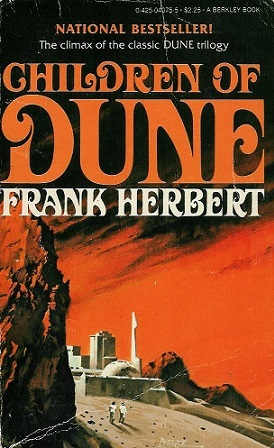 "I'm going to rub your faces in things you try to avoid. I don't find it strange that all you want to believe is only that which comforts you. How else do humans invent the traps which betray us into mediocrity? How else do we define cowardice?"
— The Preacher
Advertisement:

Children of Dune is the third book in the original six-part Dune saga, written by Frank Herbert and published in 1976. Children of Dune was the first hard-cover science fiction best-seller and was nominated for a Hugo Award.

Children of Dune skips ahead from Dune Messiah and follows what has happened to the Atreides Imperium after Paul Muad'Dib walked off into the desert. Paul's sister Alia rules as Regent in the name of Paul's son Leto II, however her increasing paranoia leads her to continue to consume more and more Spice, exposing her as a pre-born to increased risk of possession and "abomination". Alia pressures the similarly pre-born Leto II and his sister Ghanima to do the same in order to use oracular vision to suss out threats to their empire.

The Lady Jessica and Gurney Halleck also return to Arrakis to assess the condition of her daughter and grandchildren. Meanwhile, a plot is emerging on Selusa Secundas, where the remaining House of Corrino plans a move against the Atreides twins in a scheme to re-take the throne. A mysterious preacher has also emerged to challenge the religious message of Alia's priesthood and her rule.

Will Leto II and Ghanima be able to inherit the future from their lost father and ailing aunt?