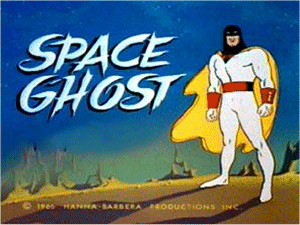 This Hanna-Barbera series, produced in 1966 for CBS, started that studio's superhero adventure cycle. South Dakota's own Gary Owens performed the voice of the spacefaring crimefighter, whose belt and wristbands conferred various offensive and defensive powers. Space Ghost's most impressive (and consistent) power, however, was invisibility. His wards, Jan and Jace, and their pet monkey, Blip, also could fly, survive in space and become invisible at will, though they lacked the offensive punch of Space Ghost's power bands. Its companion series was Dinoboy In The Lost Valley, which focused on the adventures of a young 20th century boy, his cave man protector Ugg and their pet dinosaur Bronty, as they tried to survive in a mysterious jungle area.

Space Ghost and his companions had all new adventures in the early 1980s on NBC's Animated Anthology Space Stars, and these were remarkably true to the tone of the original series. In 1994, Cartoon Network gave Space Ghost a 15-minute evening talk show, Space Ghost Coast to Coast; the creators of that show later helped launch Adult Swim. There was also a 2005 comic book limited series that gave him a very much Darker and Edgier backstory. The 2016 comic series Future Quest features him as a lead, alongside Jonny Quest, Birdman, and other Hanna-Barbera action heroes.

Moltar, one of the show's villains, was also the very first host of Toonami. In fact, Toonami can trace its roots back to Space Ghost, since it was a More Popular Spin-Off of Space Ghost Coast to Coast, which itself was a spinoff of Space Ghost. This show was even a part of Toonami's very early lineup, via the Cartoon Roulette.