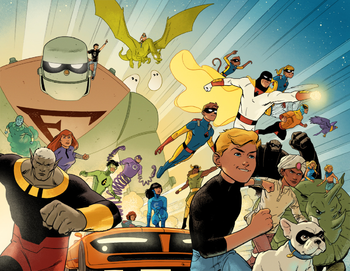 Future Quest was a limited series published DC Comics that involve the various action-based heroes created by Hanna-Barbera and is part of the Hanna-Barbera Beyond initiative.

A mysterious series of alien incursions is happening on Earth, and it's concerning Dr. Benton Quest, especially when this is getting the attention of his arch-nemesis Dr. Zin and the terrorist organization F.E.A.R. However, as Team Quest soon starts to realize, this may be bigger than initially thought, an adventure that's going to bring in a whole lot of heroes to contain them.

Series involved in this crossover include
Advertisement: