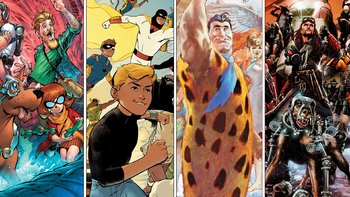 Hanna-Barbera Beyond is an initiative by DC Comics to create new "modern" series involving Hanna-Barbera's cast of creations, often set in Darker and Edgier settings, first announced on January 28th, 2016

. The following series were created for the label:

There are also a series of specials crossing over with The DC Universe (collected under the name DC Meets Hanna-Barbera), the backup stories of which, served as prologues for several new comics in the first volume, Jetsons, Ruff and Reddy, and Snagglepuss:

, due to Hanna-Barbera being allegedly dissatisfied with the way their characters were reinvented.

See also Scooby-Doo! Team-Up, a series of Weird Crossovers between Mystery, Inc. and The DCU and other H-B properties.