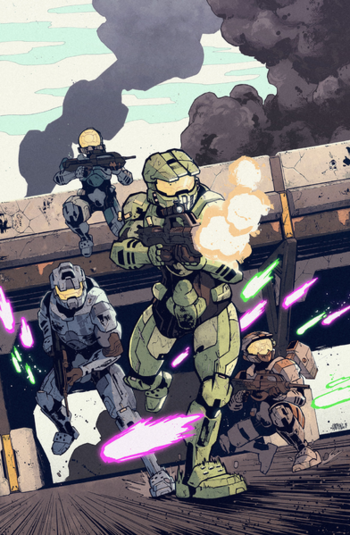 Cover art by Zak Hartong
"You wouldn't be human if you weren't grieving. Honor that feeling."
—Dr. Catherine Halsey
Advertisement:

Halo: Collateral Damage is a three-issue comic book mini-series set in the Halo universe. It is written by Alex Irvine and illustrated by Dave Crosland, and also serves as the first entry in the A Master Chief Story sub-series.

In the first year of the Human-Covenant War, a young Blue Team is sent to the besieged world of Alpha Corvi II, where they are to relieve the UNSC's ground forces while also earning combat experience and the opportunity to test some of the Mjolnir armor's experimental features. Upon arrival, the Spartans are directed to Black Reef, a seemingly unimportant mining settlement that the Covenant nonetheless dedicated a portion of their invasion force to attacking. Blue Team are tasked with discovering what motivated the Covenant's assault on the town, with the added complication that Black Reef is under the jurisdiction of an Insurrectionist group aligned with the United Rebel Front. An uneasy alliance between Blue Team and the group they were originally created to fight is formed, as they plan to fend off the alien invasion and discover the secret underneath Black Reef.