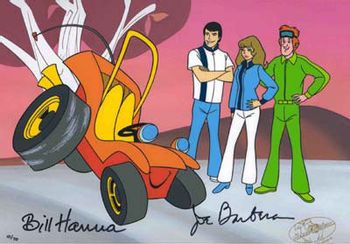 "Who put the antifreeze in my carburetor?"
Advertisement:

Hanna-Barbera created this Saturday Morning Cartoon, one of several following the lead on Scooby-Doo, for CBS in 1973. Throughout the rest of the decade, Speed Buggy rotated among the three networks' schedules.

Speed Buggy was a talking dune buggy, possibly the grandson of Chugga-Boom from The Perils of Penelope Pitstop. When his mechanic, Tinker, wasn't driving him in a race, Speed Buggy fought crime with Tinker and his friends, Mark and Debbie. Speed Buggy also crossed over to The New Scooby-Doo Movies and competed in the Laff-A-Lympics