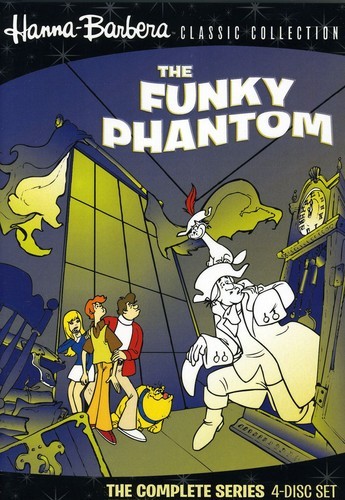 A Hanna-Barbera series similar to their earlier success Scooby-Doo, Where Are You!, The Funky Phantom features three teenagers — Skip, April and Augie — and their dog, Elmo. While trying to get out of a storm, they entered an old abandoned house where they found a longcase clock set to the wrong time. Upon setting the clock to midnight, they released two ghosts: Jonathan Wellington "Mudsy" Muddlemore, a dead soldier from The American Revolution, and his cat, Boo. The two of them allegedly hid inside the clock from the British during the Revolutionary War, but then couldn't get out and eventually died inside. Ever since being freed by their new friends, Mudsy and Boo have accompanied them on many mysteries, always giving an invisible helping hand.

The show—Hanna-Barbera's first series with animation work farmed out overseas (in this case, to Air Programs in Sydney, Australia)—aired for one season (1971–72) on ABC. The voice of Mudsy, provided by Daws Butler, was identical to his voice work for the character Snagglepuss. Butler went so far as to include Snagglepuss' catch phrases, such as appending sentences with the word "even".

The Funky Phantom provides examples of: