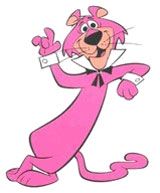 Snagglepuss is a Hanna-Barbera cartoon character created in 1959 and voiced by Daws Butler. He originally appeared in episodes of The Quick Draw McGraw Show and became a regular in The Yogi Bear Show. Snagglepuss lives in a cavern which he tries to make more habitable for himself. No matter what he does, he always winds up back where he started or worse off than before. Snagglepuss is chased in some episodes by the tiny hunter Major Minor.

In addition to the cartoons, he also appeared in commercials for Cocoa Krispies, Metlife, and Cartoon Network.

Although he is a pink panthernote a mountain lion, which is also called "panther" in some parts of America, do not confuse him with The Pink Panther, whom he predates by four years.