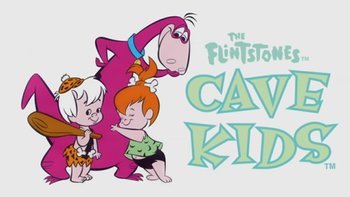 Cave Kids is an animated Spinoff Babies series of The Flintstones featuring Pebbles and Bamm-Bamm, in baby form. It first aired in 1996 on Cartoon Network, and only eight episodes were made. Of these eight, only six were initially released onto home video, with the other two showing up when the entire series received a digital download-to-own release.