Literature / Jack and the Beanstalk 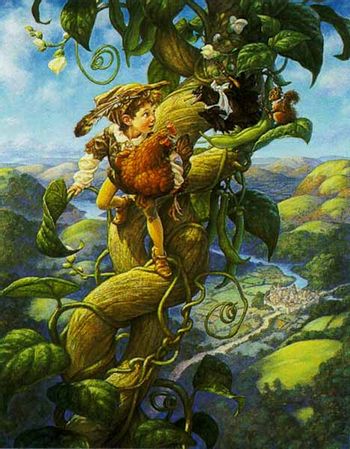 First it's only stealing some poultry. Before you know it it will be Harp-Jacking and Giganticide.
Advertisement:

The story of "Jack and the Beanstalk" seems to be an amalgamation of many of the giant-killing stories such as "Jack the Giant Killer" (which has its links to Arthurian lore), and the tale of "The Brave Little Tailor".

Jack and his widowed mother are a poor family with nothing to their name but the family cow. When the last of their money finally runs out Jack's mother sends him into town to sell their cow at the local village. On the way, however, Jack meets a mysterious stranger who offers him five magic beans in exchange for the cow. Jack accepts the offer and brings the beans home to his mother. Needless to say she is furious and throws the beans out the window. Overnight the beans grow into a massive beanstalk that stretches onwards up into the clouds. Jack decides to climb the beanstalk and when he reaches the top finds a massive castle. He sneaks into the castle to find that it is the home to a Giant, who says:

Fee-fi-fo-fum!
I smell the blood of an Englishman.
Be he 'live, or be he dead,
I'll grind his bones to make my bread.

Jack is about to run but he sees a bag of the giant's gold, which he quickly nicks before fleeing back down the beanstalk.

The next day Jack, remembering all the other treasures up the top of the beanstalk, decides to give it another crack. He climbs back up and into the giant's castle. Once again the Giant's nose gives him the tip-off that there is a human around, but the Giant's wife hides Jack in the oven until her husband falls asleep. Jack sneaks out, but on his way grabs the goose that lays the golden eggs and takes it with him.

On the third day Jack decides to head up the beanstalk again. His mother pleads with him not to go, but Jack chooses to give it one more time. When he reaches the castle the Giant pulls out a little golden harp that plays music by itself. The soft music lulls the Giant to sleep, then Jack sneaks out and snatches the Harp. But the Harp doesn't like the idea of being stolen and cries out to the Giant, waking him up. The Giant chases Jack down the beanstalk, but Jack reaches the bottom first, grabs an ax and chops down the beanstalk, killing the giant.

The first known printed version of "Jack and the Beanstalk" dates from 1734 and was called "The Story of Jack Spriggins and the Enchanted Bean". Of the numerous variants of the tale printed in the 19th century, the one by Joseph Jacobs (1890) is the most popular (read it here

Many critics of this story like to point out Jack is a petty thief, who also kills the Giant he robbed. Some versions justify his actions by various means, such as adding a bit about how the Giant killed Jack's father and/or that the Giant stole most of his treasure in the first place. In the latter retellings, such as in Fun and Fancy Free, the Harp is explicitly eager to be liberated from the Giant and helps Jack (or his stand-in) in any way she can. At other times this story gets the Fractured Fairy Tale treatment, showing Jack as a jerk of a robber.

Not to be confused with "Jack the Giant Killer" which has a different plot and is much Bloodier and Gorier despite common elements.

This folk tale provides examples of: