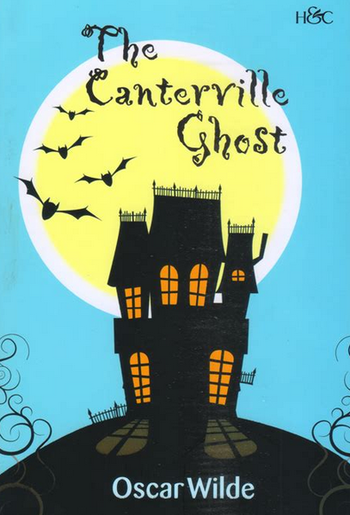 "The Canterville Ghost" is an 1887 short story by Oscar Wilde which serves as an Affectionate Parody of the Haunted House tradition.

A wealthy American political family, headed by Hiram Otis, purchases Canterville Chase from its aristocratic owners. Initially, Mr. Otis scoffs at the news that the estate comes with a ghost, but sure enough, one soon appears: Sir Simon de Canterville, who murdered his wife in 1575, and was murdered himself a few years later. As Sir Simon discovers all too quickly, the Otis family proves resistant to his best haunting effects, and he becomes deeply melancholic. The innocent Virginia Otis, however, turns out to be the solution to his plight.

The story is in the public domain, and can be read here

. There have been several screen adaptations, most notably a 1944 film directed by Jules Dassin and starring Charles Laughton as Sir Simon.

"The Canterville Ghost" provides examples of: