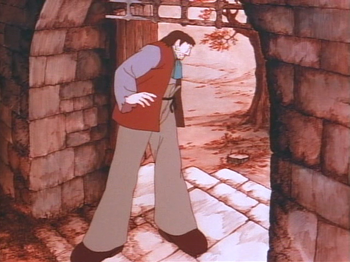 "The Selfish Giant" is an 1888 short story by Oscar Wilde.

Somewhere in medieval times there is a village. The children of the village like to play in a garden, filled with beautiful flowers and grass and songbirds and peach trees that bear ripe fruit. The garden belongs to a giant, who has a castle but has been absent for seven years.

When the giant finally does return from his long vacation, he promptly scares the children out of his garden and builds a wall. But this has unintended consequences.

It has been adapted many times. In 1972 it was adapted into a 26-minute animated short film directed by Peter Sander, which ran on Canadian television.

Tropes specific to the 1972 animated short: