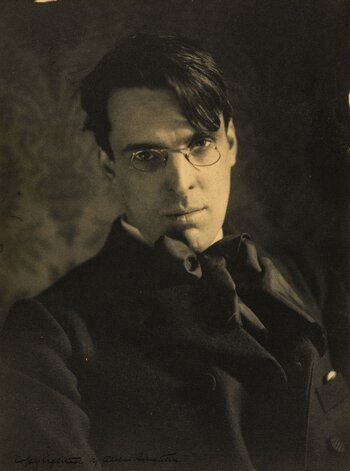 Had I the heavens’ embroidered cloths,
Enwrought with golden and silver light,
The blue and the dim and the dark cloths,
Of night and light and the half light,
I would spread the cloths under your feet:
But I, being poor, have only my dreams;
I have spread my dreams under your feet;
Tread softly because you tread on my dreams.
— "Aed Wishes for the Cloths of Heaven"
Advertisement:

William Butler Yeats (13 June 1865 – 28 January 1939) was an Irish poet, Nobel Prize winner and well-known/often-cited literary figure. He was inspired by Irish myth and folklore as well as the writings of William Blake.

This guy is responsible for a lot of the Stock Quotes floating around in pop culture. His poem "The Second Coming" is the source of many Literary Allusion Titles and is his most famous and most referenced worknote outside Ireland that is; in Ireland "Sailing to Byzantium" and "September 1913" are probably better known; "The Lake Isle of Innisfree" was voted the nation's favourite poem in an Irish Times poll.. If you hear a Fauxlosophic Narration, read a snippet of poetry preceding a bunch of prose or even see a character trying to sound deep and meaningful, there is a reasonably good chance that William Butler Yeats is being quoted.

He also had, like most great poets, something of a dirty streak, although nowhere near as wide that of Shakespeare or his contemporary James Joyce.

He was also one of the founders of Dublin's famous Abbey Theatre, and actually shamed a mob who rioted at the premiere of Sean O'Casey's The Plough and the Stars there.

Also, his last name is pronounced "Yates," not "Yeets."

The entirety of his work can be found here

Works by Yeats with their own pages: