Theatre / The Plough and the Stars 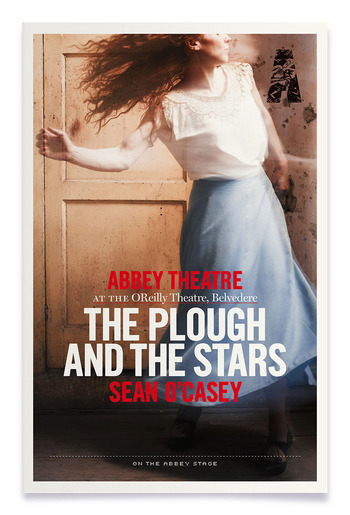 A classic Irish play written by Sean O'Casey set during the infamous Easter Rising from the point of view of the working class residents of a Dublin tenement:

All of them more-or-less get along when Bessie isn't engaging in quarrels with her Catholic neighbors. The central conflict between Jack and Nora. Nora wants to Jack to stay at home with her, while Jack feels compelled to honor the call of the Irish Citizen Army when the Easter Rising begins in earnest. What follows is the unfolding of the six day rebellion from the tenants point of view and how it affects their lives.

During its premiere at the Abbey Theatre in 1926, the audience rioted in part because of the deception of a prostitute but also because they thought it was an insult against the men who fought in the Rising which to led W. B. Yeats (the Abbey's cofounder) Shaming the Mob: "You have disgraced yourselves again; is this to be the recurring celebration of the arrival of Irish genius?". note  Similar riots had broken out nineteen years earlier in reaction to the play The Playboy of the Western World. Nevertheless, the play has become a classic and is regularly performed in Ireland today.

It was also made into an ill-received film in 1936 by John Ford, that he himself disowned because of how RKO Pictures forced him to downplay the politics and put more focus on Jack and Nora. In fact he was so fed up that he let the set and left the assistants to finish it. The tumultuous Abbey Theater premiere is dramatized in one of John Ford's last films, Young Cassidy.