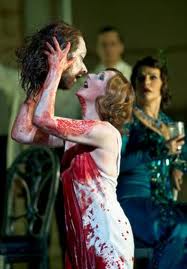 Salomenote pronounced "sal-oh-may" is a one-act play by Oscar Wilde. The play was first published in Wilde's not very fluent French in 1893, and was first produced in Paris three years later; the British Censorship Bureau forbade its production due to its scandalous sexual content.

Salome, step-daughter of the biblical King Herod, has just fled from a party to the palace terrace, bored. She hears the prophet Jochanaan (John the Baptist), who is imprisoned in a cistern outside the palace, cursing her mother Herodias for marrying Herod, who was previously her brother-in-law. Salome, curious, wants to meet him. She asks Narraboth, the young Syrian captain of the guard and desperately in love with Salome, to bring Jochanaan to her, and despite Herod's orders that Jochanaan talk with no one, he does.

When Jochanaan comes before her, still shouting prophecies about Herod and Herodias, Salome falls instantly in lust with him, and offers herself to him — an offer that Jochanaan rejects. Narraboth, unable to accept that Salome loves another, kills himself. Jochanaan is taken back to the well, still preaching about salvation through the Messiah.

Herod enters, followed by his wife and court. After slipping in Nabarroth's blood and hallucinating, he stares lustfully at Salome, who rejects him. Jochanaan harasses Herodias from the well, calling her incestuous marriage to Herod sinful. She demands that Herod silence him. Herod refuses, and she mocks his fear. Two Nazarenes tell of Christ's miracles; at one point they bring up the raising of Lazarus from the dead, which Herod finds frightening.

After Salome refuses to eat and drink with him, Herod finally begs Salome to dance for him. He promises to reward her with her heart's desire — even if it were one-half of his kingdom. Salome, once she gains Herod's vow to reward her, performs the Dance of the Seven Veils. Herod, after her dance, is ready to grant her soul's desire. She asks for the head of Jokanaan in a silver charger. To this, Herod agrees, although reluctantly. When the severed head is brought to Salome, she kisses its lips, but her triumph is short-lived as a horrified Herod orders his men to kill her.

Salome caused renewed controversy when it was adapted into an opera by Richard Strauss. The opera's libretto follows the German translation of Wilde's French word for word (though abridged in some places). There have also been three film adaptations: a 1923 silent film; 1988's Salome's Last Dance (a Ken Russell film that presents the play as a Show Within a Show being put on for Wilde himself by the staff of a London brothel); and a straight filmed version of the play as directed by Al Pacino (with Pacino as King Herod and the title role played by Jessica Chastain in her film debut). You may also recognize that a film adaptation of it was the ill-fated intended comeback film from Sunset Boulevard.

Not to be confused with the Xandria album by the name Salome, the Seventh Veil, whose title was likely inspired by the play.

This play and opera contains examples of the following tropes: