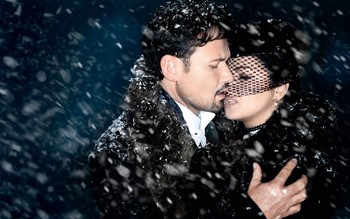 Oh, how the tables have turned... note Mariusz Kwiecien as Onegin and Anna Netrebko as Tatyana

Eugene Onegin (Russian: Евгений Онегин) is a Russian opera in three acts by Pyotr Ilyich Tchaikovsky, based on Alexander Pushkin's novel of the same name. Set to a libretto by Tchaikovsky himself (with some additions by his friend Konstantin Shilovsky), it closely follows certain passages in Pushkin's novel.

Tatyana Larina, a hopeless young romantic, sees the world as a romance novel, and is a dreamer compared to her spirited sister Olga. One day, the Larin country estate receives a visit from Vladimir Lensky, Olga's fiancé, who is accompanied by his good friend Eugene Onegin, a bored city-dweller. Tatyana falls deeply in love with Onegin, and is motivated to write him a love letter that night. However, much to her despair, Onegin rejects her, telling her that he's not suited for marriage before coldly suggesting that she doesn't wear her heart on her sleeve.

Three months later, it's Tatyana's name day (similar to a birthday, but held on the day that one's name is associated with), and a country ball is being held in her honour. Onegin dances with Tatyana at the ball, but quickly becomes annoyed with the gossip around them. Already irritated with Lensky for making him come, he decides to flirt with Olga, who responds enthusiastically to him. After the two of them repeatedly dance together, which only increases the tension and fuels Lensky's growing anger, Lensky loses his temper and publicly renounces his friendship with Onegin before challenging him to a duel, to which Onegin has no choice but to accept. However, as he waits for Onegin the following dawn, Lensky comes to regret his decision, knowing that he's not going to live. Onegin arrives late, and he doesn't want to follow through with the duel, but it's too late. The duel starts and Onegin shoots Lensky dead.

Years later, Onegin is in a St. Petersburg palace for a ball, reflecting on his extensive travels through Europe and regretting the killing of his best friend, and then reflects on his own empty life. Right then, the ageing war hero Prince Gremin enters the ballroom with his wife Tatyana, now a regal, aristocratic beauty, to Onegin's shock. And right then, Onegin realizes that he's in love with her, and so he writes to her and arranges a private meeting with her.

Upon receiving the letter and meeting him again, Tatyana is deeply conflicted, as old feelings are re-awakened. She and Onegin lament over their near-happiness, but her resolve is much stronger. While she still loves Onegin, she is determined to stay faithful to Gremin, and despite Onegin's desperate pleas, Tatyana bids him farewell forever, leaving him alone and in despair.

After its premiere at the Maly Theatre in Moscow on March 29th, 1879, the opera has become a regularly-performed work in the worldwide operatic repertoire. To this day, it is widely considered to be the quintessential Russian lyric opera, as it doesn't follow traditional operatic structure, but is often described as a series of "lyric scenes". It has also been sung in English, Czech, and Italian as well, but is most commonly performed in its original Russian.