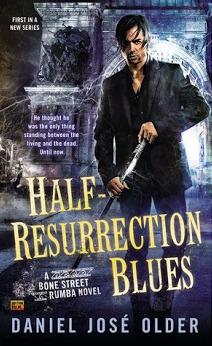 Carlos Delacruz, Soulcatcher. This is his world.
Bone Street Rumba is an Urban Fantasy universe, described in novels and short stories by Daniel José Older, published by Tor.
Advertisement:

Carlos Delacruz is what is known, in supernatural parlance, as a "halfie". What that means is "half dead, half alive." What that means is that he was dead once, was brought back to life, and now exists in a state that is partially in both worlds. His skin is grey and cold like that of a corpse. His heart beats — a little.

His peculiar state is a rare one and it makes him useful to the Council of the Dead, the ghosts who are in charge of the dead populace of New York City. As such, he works for them as a soulcatcher: one of those who either apprehends or dispatches ghosts who do not simply accept their lot but who try to mess with, commune with, or disturb the living; or who try to change the balance between the living and the dead.

Riley is Carlos' partner in the missions they undertake.

Sierra Santiago is a teenage girl in Brooklyn who discovers at the beginning of her summer vacation that she is the granddaughter of a Shadowshaper, and discovers her own gift: the very same ability to communicate with spirits through art.

Gordo is a fat man with a gift for music, who is able to see ghosts. Krys is one of Carlos' coworkers in the COD. Baba Eddie is a santero who runs a shop in Brooklyn — or, more, he lets his niece and intern Kia do it.

The series is interesting and unique in that while it is Urban Fantasy genre, it is not the usual melange of European-based supernatural creatures and stories. Carlos and Sierra's stories involve Afro-Latin and Afro-Caribbean supernatural entities and stories instead. The characters are diverse, but without being tokens. There are people of diffferent ethnicities, religions, and lifestyles, showing the diversity of New York very close to how it is in the real world, and keeping in mind that old adage about how many millions of stories there are in the naked city — and that each person has their own.