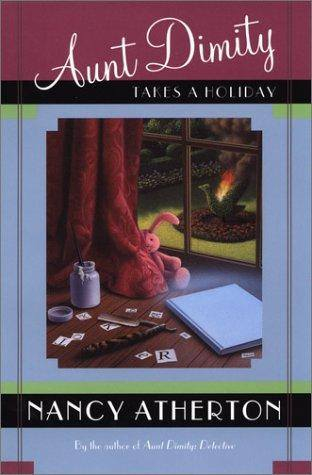 Cover art featuring Dimity's journal and Reginald (that's him behind the curtain).
Advertisement:

American Lori Shepherd grew up hearing her mother regale her with the adventures of "Aunt Dimity" in England. Lori believes the tales are entirely made up and cherishes them as pleasant childhood memories (much as she cherishes her old stuffed rabbit Reginald). Recently divorced, short on money and employment, Lori's life is drastically altered when she learns that Dimity Westwood was a real person who recently died and left Lori a bequest of $10,000. The condition is a request that Lori go to Dimity's old home (a honey-coloured stone cottage near the village of Finch, said to be in the Cotswolds), search through Dimity's decades-long correspondence with Lori's mother, and write an introduction to a soon-to-be-published collection of the "Aunt Dimity" stories. Through the cache of letters, Lori finds out more about the life her mother lived in London during WWII when she became friends with Dimity during their wartime service. She recognizes many of her bedtime stories as retellings of true incidents in Dimity's life.

Lori also gets a blue leather-bound journal with blank pages, with which she finds she can communicate directly with Dimity. Lori speaks to the open diary, and Dimity's half of their conversations appears on the pages in her old-fashioned copperplate handwriting. After the initial investigation to satisfy the terms of the will, Dimity continues to be available to Lori via the blue journal, allowing Dimity to keep abreast of events in her village and in Lori's life. On rare occasions, Dimity also speaks to other characters (notably Bill Willis and Emma Harris) through the journal. When it comes to detecting and problem-solving, Dimity mostly provides Lori with information from her lifetime of living in Finch, as well as advice; information about "the other side" and its denizens is sometimes cryptic or otherwise incomplete, as if Dimity must abide by certain rules.

Most of the stories take place in Finch and its environs, but there are notable excursions to Cornwall, Northumberland, Scotland, Colorado and New Zealand. Fortunately, the journal (and occasionally Reginald) can easily fit into a suitcase or knapsack—and sometimes Dimity will help pack.

Every book mentions some form of food (usually baked goods) as part of characterization and/or plot, and the recipe for that item is appended to the text.

includes information on the books and book tours, photo galleries of fans' own pets and "stuffies" (known as "Reginald's Friends") and the recipes featured in the books.

open/close all folders
The Series in Chronological Order

Bree is also a free spirit who likes challenging the stuffier residents of the village. She later says that when Peggy Taxman saw Bree's hair in church, Peggy gave her a look that "would have curdled milk." In Bree's estimation, this is a feature, not a bug.

Tropes T Through U
Tropes V Through Z