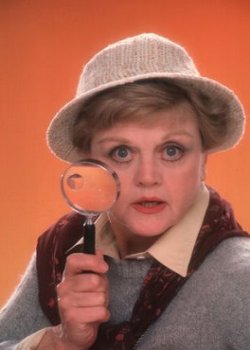 There's a subgenre of Mystery Fiction called "Cozy Mysteries", a prevalent trope of which is the little old lady investigator. She is an older lady, usually retired, usually a Cool Old Lady, who has a knack for solving mysteries and who is always solving murders wherever she goes. She's usually an Amateur Sleuth, but occasionally she works for an agency or is a registered PI. The fact that people seem to keep dropping dead around her often makes her a Mystery Magnet. This sub-genre is also known as the "tea cozy mystery".

This trope makes a perverse sort of sense. Old women are supposed to be nosy, and attract little attention when they are. A grandmotherly type may be a lot better at prying relevant but embarrassing details from suspects than the gruff policeman. They're easy to underestimate; who suspects that the doddering old local gossip is capable of unraveling their cunning master-plan? Finally, she is frequently protected by Even Evil Has Standards: who would dare to off the nice old lady? Not that the perp thinks she's nice...

More realistic takes on the concept have her solving minor misdemeanors and crimes which the police are too busy to solve. The most famous Little Old Lady Investigates character, and the Trope Codifier, is probably Agatha Christie's Miss Marple. Where family is present, she's usually why you should Never Mess with Granny. Compare Kid Detective, which could be considered the other extreme of this trope (but unlike it, is not Always Female).