Western Animation / The Ugly Duckling and Me 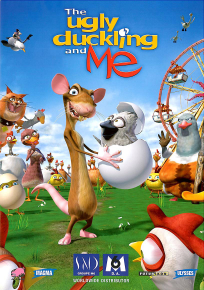 The Ugly Duckling and Me is a 2006 Danish movie (made in English) that tells the story of a rat, Ratso, who gets saddled with a very ugly duckling who thinks Ratso is his 'mama'. Ratso plans to exhibit Ugly (as everyone starts calling the duckling) as a sideshow freak, thus a portion of the movie deals with their journey to the carnival where Ratso's cousin Ernie works, with all sorts of bumps along the way. It eventually got an animated series which narrates the events after the first film.