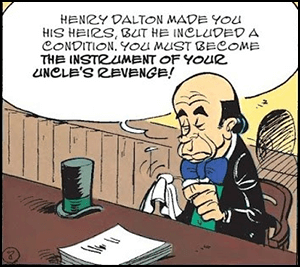 "If I leave a man in my will ten talking elephants and a hundred winged horses, he cannot complain if the conditions partake of the slight eccentricity of the gift. He must not look a winged horse in the mouth."
— G. K. Chesterton
Advertisement:

A character learns that a distant relative has passed and bequeathed to them a substantial fortune/estate. There is, of course, a catch in the will that must be obeyed. Should it be violated, everything will pass to another person.

The catch is usually one of the following:

The catch is essentially a foreshadowed Reset Button to quickly restore the status quo, since making the characters of a show extremely wealthy will almost always kill the inherent drama or central premise of the show by implying that they could simply buy their way out of whatever Zany Scheme they got into.

Thus, unless an inheritance is part of the plot from the start, whatever the character inherits, they're going to blow it by the end. They may do so by accident or purposely after deciding Celebrity Is Overrated and no amount of wealth is worth the humiliating restrictions.

A common subversion is for the characters to not blow the catch, but end up with nothing because the estate is heavily in debt and is promptly seized by a bank or the IRS for back taxes.

Another way to play it is to make the inheritance "worthless", as in a promised collection of "priceless" artwork turns out to be a pile of incomprehensible impressionist scribbles that are only "priceless" in that no one could ever be found who actually wanted to buy them. Or, it could simply be "worth-less", as in they get Great Uncle Beaureguard's $1 million fortune, but it's Confederate money. In Real Life, it would actually be worth a pretty penny to collectors, but obviously no longer worth face value.

Another possible ending is for the supposedly dead relative to show up alive, and reveal that the whole affair was a Secret Test of Character.

Very likely to overlap with A Fool and His New Money Are Soon Parted.

See Also: Never Win the Lottery, Bury Me Not on the Lone Prairie, Scarpia Ultimatum, Game Between Heirs, Prestige Peril, some cases of Divorce Assets Conflict (especially those involving a wacky prenup), and Silly Will.