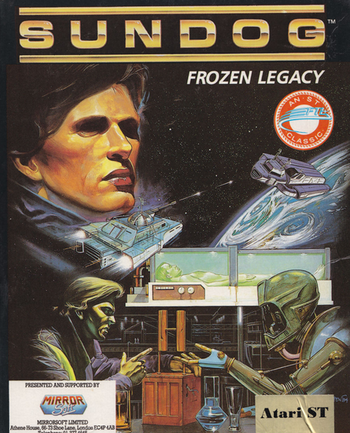 "This is my ship now. I accept the terms of my uncle's will. I claim SunDog for myself."
The Rithan chortled. "Then hop aboard. You're on your own now. Your fate lies in your hands."
Advertisement:

SunDog: Frozen Legacy was a 1984 Wide-Open Sandbox game for the Apple ][ and Atari ST computer systems. It was an early space trading game, where the Featureless Protagonist (named Zed by default) inherited the titular spaceship, the SunDog, from his late uncle. Along with the ship came the contract the uncle had taken on - to provide initial supplies for a new religious colony, and retrieve their cryogens from around the nearby star systems.

Unfortunately, the ship is in less-than-stellar condition, and you have limited funds. You can repair it, but you also need those funds as seed money for your career as a trader. You certainly don't have enough money to purchase all the goods the colony needs. And that's once you even find the colony, since all that you know is that it's somewhere on Jondd, the world you start on.

Your uncle was the low bidder, in case you were wondering.

The original version for the Apple II was ported to the Atari ST as one of the earliest games for that platform. It was the first game published by FTL Games, who later went on to make Dungeon Master among others.

, was started in the early 2000s. It floundered along for several years before serious development began in 2012. A semi-closed beta was released in March 2016.

Tropes in SunDog include: