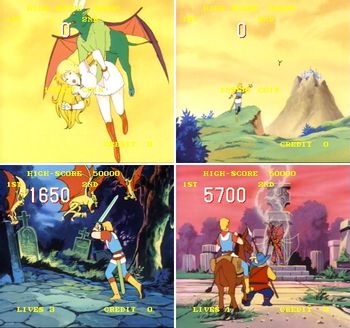 Bearing only a passing resemblance to the original Don Quixote, this was a laserdisc game released in 1984 in the vein of Dragon's Lair (the player uses a joystick to tell the character when and which way to move and a button to attack in accordance with the animation).

The player controls Don, a knight out to save his lover Isabella from a Wicked Witch. On the way he has to contend with bats, mummies, giant snakes, a flying totem pole, the legion of the undead, a flash flood, flying jellyfish and a ferocious dragon. Oh, and also the hands that appear out of the graves, bugs, aliens, serpents and booby traps in the witch's residence.