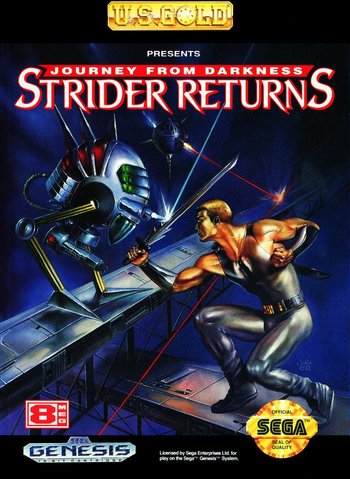 This time there will be NO LIMITS...NO MERCY...NO SURRENDER!
Hinjo: I have you now.
Grand Master Meio: Never my friend...Tomorrow is the day you die.
Journey from Darkness: Strider Returns, originally released as ''Strider II'' in Europe (not to be confused with Capcom's own ''Strider 2''), is the first licensed sequel to Strider, developed by Tiertex and published by U.S. Gold following their work porting the first game to several European home computers.
Advertisement:

According to their creator, the game started out as a small project by some employees at Tiertex which used placeholder assets from the Strider Amiga port. This caught the attention of the higher-ups, who increasingly demanded the game to resemble ''Strider'' more and more, until they directly decided it'd be better if it was an ''actual'' sequel to it. But the game's gameplay hardly resembled (and was ill-fitted to) the high-speed action of Strider, so the developers complained and eventually walked out of the company. Tiertex salvaged what could of the project and released it as Strider II. Then they ported and released it on North America for the Sega Genesis and Game Gear under the full title Journey from Darkness: Strider Returns, with similar results.

In Strider II, the player controls a white-uniform Strider only known as "The Warrior" on a mission to save the Female Leader of the alien planet Magenta from terrorists. Besides using the same Cypher sword as before, the Strider is also provided with a rifle for long-range shooting (which unfortunately prevents him from using the sword while standing still) and a gizmo that lets him transform into a tank-threaded robot for boss battles. The player goes through five stages as in the original, but other than the familiar sprite used by "The Warrior", no enemy or environment even comes close to resemble the colorful world of the original.

Strider Returns made a number of alterations: The main character is now Hinjo and the Damsel in Distress is Lexia, his beloved captured by Grandmaster Meio in a bid to get revenge for his previous defeat. Hinjo drops the rifle and robot form for the ability to throw shuriken and a set of silver orbs which activate during boss battles and spin around him causing contact damage. Now some more enemies from the previous game make their appearance, including Solo and the Final Boss being finally the Grandmaster, who before was only a feature of the title screen. Still, the game's slow movement, cheap deaths and aggravating stage layout didn't earned it any favors, and has since been dismissed by both fans and Capcom themselves.