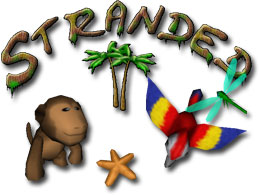 . It consists of two games, Stranded and Stranded 2. The first game was released in a German Blitz Basic forum on the 8th of June 2003 while the sequel in 2008. Your main objective in this game is to survive the shipwreck that left you stranded on a deserted island. You can make tools, hunt, forage for food, and build shelters etc. to increase your chance for survival. The ultimate objective is, of course, to build a transport main to escape the island.

has started. The game will have a map editor for the first time in the series. Despite the similar premise, these games are not related to Stranded Deep.

This video games provide examples of: