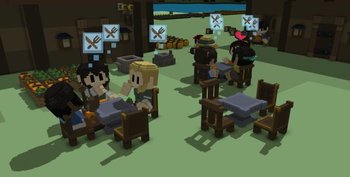 We wish it was as easy as a nice dinner with your villagemates.
Advertisement:

Stonehearth is a town building/RPG hybrid game by Radiant Entertainment, with heavy emphasis on exploration and survival in an epic fantasy setting. Inspired by games such as Dwarf Fortress (though your little people are much more mentally stable), your job is to help a small group of settlers, the so-called Hearthlings, survive and carve out a place for themselves in a hostile land. You'll need to establish a food supply, build shelter, defend your people, and find a way to grow and expand, facing challenges at every step.

The graphics of the game are essentially a tribute to The 16 Bit Era Of Console Video Games; the Hearthlings, animals and monsters are all rather adorable looking creatures built in voxels, and the world they inhabit is bright and very colorful.

The game is still currently under development, but a open alpha version is available on Steam Early Access and from the game's offical website

Compare Clockwork Empires, a more Steampunk-y, Darker and Edgier, and much more Lovecraftian game in the same vein as Stonehearth.