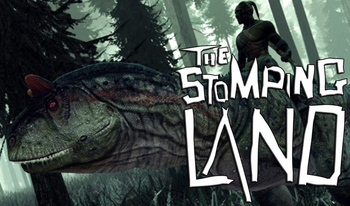 The Stomping Land was a Survival Sandbox game about dinosaurs. The player is an musclebound hunter attempting to find food in a hostile world dominated by unkillable titanic beasts. Like DayZ, multiplayer is vicious and dangerous, making stealth a constant necessity. Many players are crazed survivalists bent on eliminating all other threats to their little village. In many cases, players had more to fear from each other than from the dinosaurs. Kidnappings abound.
Advertisement:

Development ended when the game was in early access. Only a handful of the planned dinosaurs were in the game, and the larger Wayneth Island was unavailable. After collecting the money from a successful Kickstarter, the lead developer became unresponsive and left other developers unpaid. This prompted the modeler to move to another game, in effect terminating development of this one.