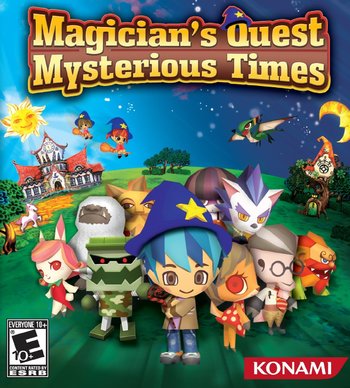 Magician's Quest: Mysterious Times, known in Europe as Enchanted Folk and the School of Wizardry and in Japan as Tongari Boushi to Mahou no 365 Nichi (とんがりボウシと魔法の 365にち, lit. "365 Days of Pointy Hats and Magic") is a fantasy adventure and life simulation game for the Nintendo DS where players are tasked with attending classes in a Magic Academy, to learn the mysteries of magic and the art of casting spells, while building relationships with other students. As well as doing the general sort of "chill out" things one does, you know—buying clothes, gardening, playing the saxophone, hanging out with your best friend the anthropomorphic cupcake.
Advertisement:

Of course, being that this world is magical, there's more to it than the sort of usual life-simmy things. At certain times, known as "Mystery Time," the magical world and the spirit world cross over, and the world is flooded with mysterious creatures, plants, and events. And in order to become a really great wizard, you'll also have to help the various magical creatures who cross into the "real" world with their various problems.

This game has two sequels released in Japan, one of them in which you have to run a shop as well as do your schooling duties. They released a 3DS version that combines all features of the game and its sequels into one game, also only available in Japan.