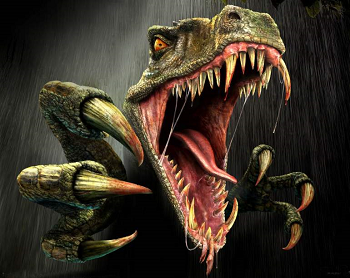 Not Everything's Better with Dinosaurs.
"Try to imagine yourself in the Cretaceous Period. You get your first look at this "six foot turkey" as you enter a clearing. He moves like a bird, lightly, bobbing his head. And you keep still because you think that maybe his visual acuity is based on movement like T. rex — he'll lose you if you don't move. But no, not Velociraptor. You stare at him, and he just stares right back. And that's when the attack comes — Not from the front, but from the side, from the other two raptors you didn't even know were there."
— Dr. Alan Grant, Jurassic Park
Advertisement:

Ever since Jurassic Park made Velociraptor a household name, its iconic image — a man-sized, intelligent, vicious, toothy, scaly killer — has appeared countless times in popular culture, usually as a Shout-Out to Jurassic Park.

Velociraptor, while still believed to be an agile and clever predator in its own right, was actually a bird-of-prey-like hunter

about the size of a turkey. The actual inspiration for the creatures found in the book and film is its larger cousin Deinonychus. Later books and films also pull in elements of Utahraptor, The Big Guy of the family which actually exceeds the size and build of the creatures in the film.

Besides Velociraptor, Deinonychus and Utahraptor, this trope potentially encompasses all portrayals of other deinonychosaurian

dinosaurs in media as well, such as the dromaeosaurids

In reality, the group is made up of many species with various hunting strategies ranging from tiny to huge in size, sharing traits like their famous sickle claws, carnivorous diet, bipedal stance, and recently discovered feathers. In fiction, however, the family shares traits like near-human intelligence, green or brown scaly skin, roughly human size, an insatiable desire to kill, and the name Velociraptor.

Science Marches On has further complicated things. At the time Michael Crichton wrote Jurassic Park, the dromaeosaurid subfamily Velociraptorinae was classified as a large collection of species resembling its namesake member, which included Deinonychus. Thus this species was at the time considered to technically be a velociraptorine, note Including in reference books such as Gregory Paul's Predatory Dinosaurs of the World, which was a major reference source for Michael Crichton while writing Jurassic Park, and the Rule of Cool dictated Crichton use the name that could be shortened to "raptor".

This is no longer the case, however, thanks to some shuffling of classifications. Deinonychus is no longer a velociraptorine. There are analyses that suggest troodontids and dromaeosaurids were not close relatives at all, and/or that some groups traditionally considered to be dromaeosaurids were not, instead being closer to modern birds (although others maintain the traditional view). Some recent analyses also suggest that the so-called "first bird" Archaeopteryx may either be a deinonychosaur as well (in other words, closer to Velociraptor than to modern birds), or farther from modern birds than deinonychosaurs are. This has even led to speculation that traditional dromaeosaurids may have had ancestors who became flightless. And in a final hilarious twist, there is still no universal agreement on where Deinonychus fits in the raptor's Tangled Family Tree.

It's worth noting that before Jurassic Park made Velociraptor famous, Deinonychus was the most frequently-seen dromaeosaur in pop-culture. Many dinosaur-themed works of fiction from the 1970s and 1980s feature Deinonychus as the token dromaeosaur.

In any case, it's worthy to note that there is very little difference between the body plans of Archaeopteryx, troodontids, dromaeosaurids and a number of other (relatively) small birdy things in that part of the family tree. Much like modern birds of prey, size and potential color patterns aside, the average person would probably have little luck telling them apart in life, even before they tried to claw your eyes out for being too close to their nest.

For a more thorough listing of the inaccuracies that tend to show up in various works, see the folder below. For good examples of accurate deinonychosaur portrayals, see these

Basically, an accurate dromaeosaurid would really just look like a Toothy Bird.

Subtrope of Stock Dinosaurs. Usually an example of Artistic License – Paleontology, what with Jurassic Park being the Trope Codifier, and sometimes of Everything's Better with Dinosaurs, if raptors are added just for coolness. See also Ptero Soarer and T. Rexpy.

For the other kind of raptor attack, see Kidnapping Bird of Prey. See also Xenomorph Xerox for a type of alien monster that tends to have similarities with raptors. Can fit nicely into Feathered Fiend if the raptors are portrayed accurately with feathers.

open/close all folders
List of Common Inaccuracies in Media