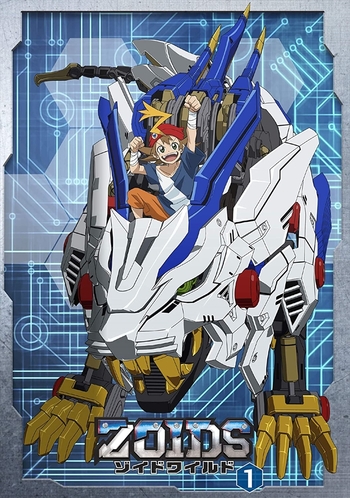 Zoids: Wild is the fifth series in the Zoids franchise. It was released on July 7, 2018 in Japan on TBS. The first half was released internationally on Netflix on August 14, 2020, with the second half added on October 1st of the same year. It is aimed at a slightly younger audience than prior Zoids anime, and as such features even more Shonen anime tropes than its priors.

The story follows Arashi, a young teenager from a remote village, as he attempts to capture and bond with a wild Zoid. His attempts are met with failure and disapproval from his grandfather, who doesn't want him running off and never coming back like Arashi's father. During a nearly disastrous attempt at capturing a Pincers, Quade of Team Supreme saves Arashi. Supreme is a band of traveling Zoid Seekers looking for Liger, a legendary white Lion-type that escaped from the clutches of the Dark Metal Empire. The Liger is said to have unspeakable power and defeated 100 soldiers on its way out.

Liger eventually shows up just outside the village, where it's pursued by the Empire's goons. Arashi finds Liger and tries to convince him to let Arashi become his rider. While this doesn't go anywhere at first, Arashi freeing Liger from the hunter squad's tasers despite being shocked himself convinces Liger to team up with Arashi and fight them off. After some training with Quade, Arashi sets off for adventure, first to just get to see the world and later to find his missing father and the mythical Ancient Treasure Z while fighting off the forces of the Dark Metal Empire.

An accompanying toyline was released by TakaraTomy in Japan and Southeast Asia, while the American and European release was adapted by Hasbro. Very few changes were made to the toys themselves, except for the exclusion of stickers, molding the eyes in instead of having them as separate pieces, and including pilot figures based on the show's characters rather than generic, identical clear plastic riders; this was originally intended for the Japanese version but changed prior to release.

This series was followed by Zoids: Wild Zero, which is mostly unrelated despite the similar name and design aesthetic.