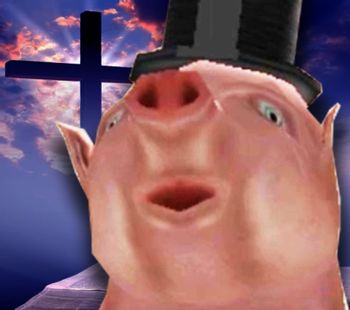 A trainwreck of the most beautiful kind.
"Zoo Race is... is a game. Someone made this. This is a thing that exists and was put into the world knowingly."
— JonTron, The Zoo Race

Zoo Race is a Christian-themed animal racing game. It was released independently in 2007 on the developers' own website,

In it, a researcher named Reuben is reading about Noah's Ark, when Hannah, a librarian, makes fun of him for it. For reasons unknown, both they and others are transformed into animals, and pitted in a foot race.