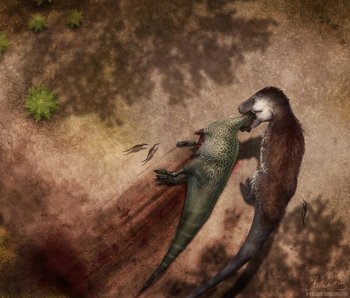 Lunch on the Beach
Advertisement:

is a dinosaur-themed simulation game taking place in the Hell Creek formation, located in what is now South Dakota, during the Late Cretaceous.

Upon full release you can play as either Dakotaraptor note originally Acheroraptor; currently playable, Triceratopsnote currently playable, Tyrannosaurus rex, Pachycephalosaurus, Anzu, or Ankylosaurus note the latter two being voted for by fans, the other choices being Ornithomimus for the omnivore and either "Anatosaurus" or Denversaurus for the herbivore as you grow from hatchling to adult, looking for food and avoiding predators.

The game aims to be as accurate and up to date as possible, doing its best to debunk many dinosaur stereotypes.

. The (successful) Kickstarter page can be found here

The game went into Early Access on Steam on August 2nd, 2017. The pre-release demo was released for backers only on June 8th. There are presently no plans to port it to consoles.