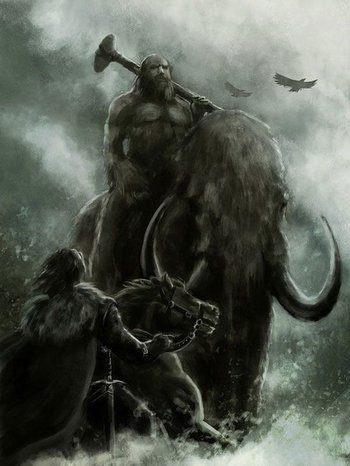 When Mammoths Mean Medieval.
Gail: This makes no sense [...] That's clearly an early medieval city. I mean, come on, everyone knows that woolly mammoths died out some time in the late Neolithic period.
Rob: Yeah, everyone knows that.
— Love, Death & Robots, "Ice Age"
Advertisement:

Prehistory is full of creatures that could pass for fantastic; mammoths, sabre-toothed cats, dinosaurs and millions of others are strange and unusual enough to be very serviceable fantastic beasts alongside griffins, dragons and the like, while still similar enough to modern fauna not to feel too out of place in Earth-like worlds. The problem is, you might think of prehistoric human society as boring. The solution? Medieval Prehistory.

Medieval prehistory involves vaguely prehistoric plant and animal life, or climate and environmental conditions, with knights, castles, and princesses coexisting. Doesn't necessarily have to be set in Medieval Europe or a Fantasy Counterpart Culture to it, but it does have to involve a pre-industrial society, so Ancient Grome and Ancient Africa or even Mayincatec etc. are permitted. Stone Punk, which usually involves a more modern-type society, is an entirely different trope.

Depending on the setting, this can potentially be anything from a fantasy world explicitly set in the Earth's real or fictional prehistory, with the prehistoric elements taking front and center, to a more conventional fantasy world with a few species of dinosaur and Ice Age megafauna added in among the usual fantasy creatures.

The precise role and prominence of the prehistoric elements can vary, but it typically varies between the primordial creatures being simply another part of the environment and their being rarer creatures restricted to isolated areas and remarkable in-universe as well as out. In the first case, they'll generally be treated as just more animals by local people, who will often have a variety of common names for them and may have domesticated a few varieties.

Ice Age creatures and other Cenozoic megafauna are some of the most common creatures seen in this role, in large part because their similarities to modern animals makes them easier to insert in environments ultimately based on real-life ones. The fact that they're mostly associated with cold environments makes them particularly common sights in the Grim Up North; mammoths, in particular, are a fairly common sight in frigid fantasy northlands and may be present even when no other prehistoric creatures are. Dinosaurs are rarer, but also see consistent use; they're less likely to just be something you might find in the woods, but expeditions to a Lost World or the depths of a distant jungle often stand a good chance of running into these creatures. Other prehistoric fauna, such as more obscure mammals and anything that lived before the dinosaurs, is used much more sporadically.

Subtrope of Anachronism Stew. Often overlaps with Alternate History or Historical Fantasy, usually based on the premise that the asteroid did not wipe out the dinosaurs or that somehow other wildlife managed to survive up until the medieval era or something involving Time Travel. Don't expect the wildlife to live in the areas they did in reality.

Related to Dinosaurs Are Dragons and often overlaps with Fantasy Kitchen Sink. Not to be confused with 1 Million B.C., which involves stereotypical stone-age 'cavemen' living alongside creatures such as dinosaurs, or Prehistoria, its video game equivalent. Can contain elements of The Dark Times and The Time of Myths, or Ambiguous Time Period, and Domesticated Dinosaurs.

See also Living Dinosaurs, for when dinosaurs survive all the way up to modern times.