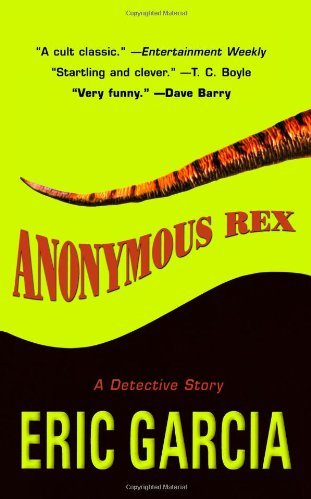 An offbeat detective novel series by Eric Garcia (better known as the author of Matchstick Men.)

Los Angeles private investigator Vincent Rubio finds himself investigating what at first appears to be a simple insurance case. He quickly finds himself in the middle of a full-on murder mystery complete with turgid affairs and mistaken identity. He only makes it through by the edge of his large talons.

Did we mention Vincent was a Velociraptor?

Yes, there are dinosaurs living among us, disguised as humans. As silly as the premise is, Garcia treats it about as seriously as he can, and comes up with a pretty interesting back-story and culture for his dinosaurs. And the books are funny as hell.

Other books in the series include Casual Rex and Hot and Sweaty Rex. Not to be confused with Theodore Rex. Loosely adapted into a Sci-Fi Channel original movie.

Part of a sort of string of "fantastic noir" novels by different authors that all seemed to arrive at around the same time, including the books, The Hollow Chocolate Bunnies of the Apocalypse, Sweet Silver Blues, Stalking the Unicorn, and Who Censored Roger Rabbit?