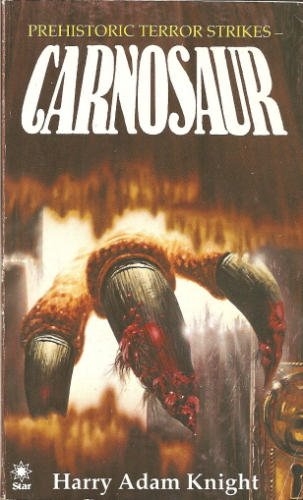 "Candy-gram!"
A novel by Harry Adam Knight (a penname of Australian science fiction author John Brosnan, used for his schlockiest work), written in the 80's, some time prior to Jurassic Park. The novel's story is vastly different from the In Name Only Roger Corman film. In it, David Pascal in Cambridgeshire, England is trying to discover the causes of a recent rash of deaths. The local bigshot, Sir Darren Penward, who collects rare and exotic predators, insists it was a Siberian tiger that escaped from his private zoo. However the lone survivor of one of the attacks, a small boy, claims it was a dinosaur.
Advertisement:

Pascal investigates further (mostly through wooing and ultimately sleeping with Penward's wife, Jane) and discovers Penward's scientists have cloned predatory dinosaurs for him to add to his collection. Inevitably the dinosaurs escape and wreak carnage throughout Cambridgeshire as the local police attempt to battle them.