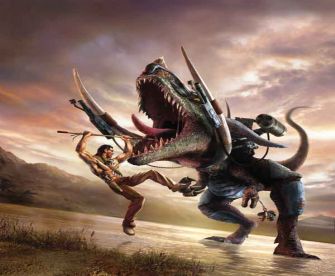 Dentistry in the Lost Lands is not a popular career choice.
"I... am TUROK!"
Advertisement:

Turok is a Comic Book hero, a Pre-Columbian Navajo Warrior, who debuted in late 1954. Turok and his friend Andar accidentally fall into a valley full of dinosaurs and struggle to survive and find their way out. In 1956, Turok got his own title, Turok: Son of Stone, originally published by Dell Comics, but later by Gold Key Comics. Then he had another series in the 1990s after the character was acquired by Jim Shooter's Valiant Comics; it was there that the nature of the valley (and Turok's role in it) were expanded.

In the Valiant series, 'Turok' was not a name, but a title: The Turok was the eldest male in the Fireseed family whose job was to close the portal from Earth to the Lost Lands; a strange, dark world where an evil tyrant named Mothergod had created an army of bio-mechanical dinosaurs to do her bidding. Though Tal'Set Fireseed, the first Turok, closed the portal, he and his brother Andar ended up After the End in a Scavenger World instead of in their own time. Mothergod, unfortunately, had followed them back with a group of bio-mechanical dinosaurs and, enlisting the aid of other tyrannical figures in this post-apocalyptic nightmare world, had vowed to finally hunt down and kill Tal'Set and Andar.

After Acclaim bought out Valiant Comics, a popular series of Turok video game adaptations began in 1997. Acclaim continued the comics as a subtle Continuity Reboot of the Valiant series, focusing on Joshua Fireseed, a descendant of Tal'Set, as he juggled his life of a Ordinary High-School Student on modern-day Earth with his responsibility as Turok. Being that the comics were largely tie-in material for the games, they are mostly forgotten about today. It also didn't help that a mix-up with the distributor kept most of the copies in warehouses. When Acclaim went under due to a number of failed games and marketing blunders, Acclaim's comics, and by extension the Valiant series, died with them.

2008 saw the release of an animated Direct to Video movie called Turok: Son of Stone based on the comic series of the same name. The animation was done in Timm Style (one of the film's 3 directors directed the DTV movie Batman Beyond: Return of the Joker), however unlike the original comic it was considerably darker and gorier with High-Pressure Blood and dismembered limbs a-plenty.

A reboot of the comic headed by Dark Horse Comics (responsible for other recent Gold Key/Valiant reboots such as Solar, Man of the Atom and Magnus Robot Fighter) started in 2010. In 2014 Dynamite Entertainment acquired the rights and started a series written by Greg Pak. In 2017, yet another reboot was attempted, this time with an african-american Turok for the first time in the character's history, written by Chuck Wendig. In 2019, it was rebooted once again with the series going back to its roots and staring Turok as a Navajo Warrior and Legacy Character Andar now being his younger brother, written by Ron Marz. Only the Greg Pak run managed to last into the double digits, with the other two dying after five issues. Yet another version of the character also appeared in Dynamite's crossover miniseries Gold Key Alliance and its' followup The Sovereigns.