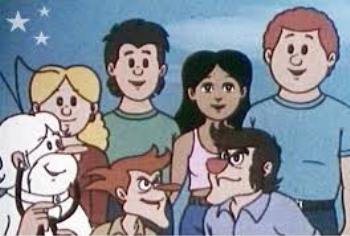 From Il était une fois... la Vie (Once Upon a Time... Life)
Advertisement:

It was created by Albert Barillé and released by Procidis, and Michel Legrand composed the scores for all of the series. Each series revolved around some main subject, intended to educate the young viewers about history, biology or science using the same bunch of characters, no matter the time period or context.

Once Upon a Time... Tropes: