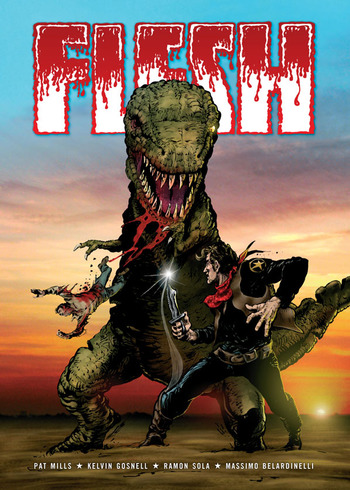 Flesh was one of the early stories written for 2000 AD by Pat Mills, and borrowed extensively from Mills' earlier work for Action, Hookjaw — although not to the extent of a follow-up story called Shako.

The first, and most popular, arc of Flesh told the story of greedy ranchers from the far future using a time machine to travel back to the Cretaceous period, where they farm dinosaurs for their meat. Eventually, the dinosaurs overpower the time-travelers and kill them all, predominantly a malevolent female T. rex named Old One Eye.

The second arc was set during the Triassic period, and featured a similar premise in which people have once again traveled back in time to hunt prehistoric animals. This time, though, the animals in question are fish and marine reptiles. This arc also brings back a character from the first one, in the form of human villain Claw Carver, as well as introducing a new prehistoric threat— the giant nothosaur Big Hungry.

Other stories in the series have been published more recently, most of them focusing on the same Cretaceous setting as the original arc.