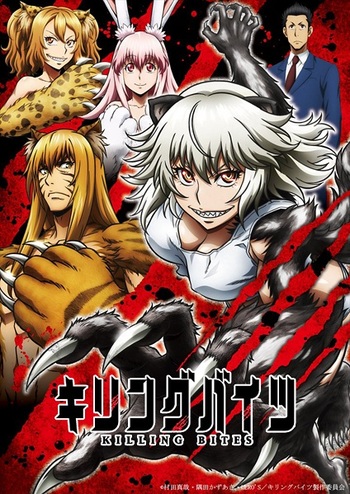 Let the Beast Sports Begin!
"The one with the sharpest fangs wins. That's what Killing Bites is."
Advertisement:

In the not too distant future, Japan is ruled behind the scenes by four economic conglomerates who fight to maintain their control over the country using Therianthropes, humans who have been genetically enhanced with animal DNA, granting them superhuman strength, speed and durability. These relentless killing machines take part in a series of underworld fights called Killing Bites, where the winner brings fortune and honor to the company they represent.

College student Nomoto Yuuya's life is changed forever when his casual acquaintances ask him to drive them around to pick up girls one day, which he soon finds out means by force. The girl they kidnap is an animal-human hybrid named Hitomi, who slaughters all of them except Yuuya. Hitomi is a honey badger, which has been called the most fearless of all animals. Now Hitomi is assigned to stay with Yuuya, for his protection. So begins his involvement in the Killing Bites, whether he likes it or not.

From Shinya Murata, the creator of Arachnid and Caterpillar.

An anime version by Liden Films started January 12, 2018. Outside of Asia, Amazon Prime had the simulcast; the series is also available on Hi Dive.

A spinoff titled Hoshi Gari Sugidesho!? Inaba-san (lit. Isn't it too much?! Inaba-san), focusing on the sexual escapades of Ui Inaba the Brute Rabbit, has been published online

since August 2020 on Monthly Heroes' Weird Heroes label alongside the main story.