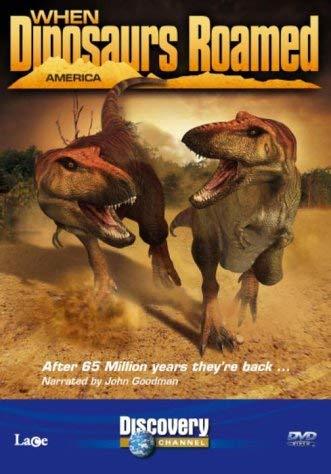 When Dinosaurs Roamed America (2001, sometimes shortened to When Dinosaurs Roamed outside North America) was the Discovery Channel's first major attempt to cash-in on the dinosaur-documentary trend started by BBC's famous Walking with Dinosaurs. Similar to that program, it also aimed for a Speculative Documentary format, and used CGI to recreate its dinosaurs, pterosaurs, and various other prehistoric animals, placing them into real-life scenery. The stories were told in chronological order, from the beginning to the end of the dinosaurs' reign. The series is narrated by John Goodman, with music by former Tangerine Dream member and Babylon 5 composer Christopher Franke.

Unlike its predecessor/competitor, however, WDRA included short cut-away scenes to paleontologists and at times froze the animation to reveal the skeletal structure behind the animals' skin, using solid facts to explain the science that went into creating the program.

Other things that make it different from WWD is the fact that it concentrates purely on American dinosaurs, and condenses its stories into small segments, instead of devoting full episodes to them.

While disliked by some due to how quickly Discovery churned it out after hearing of the dinosaurs' marketability from Britain, the product was generally well-received by the viewers, especially compared to some later works, such as Clash of the Dinosaurs and Monsters Resurrected.