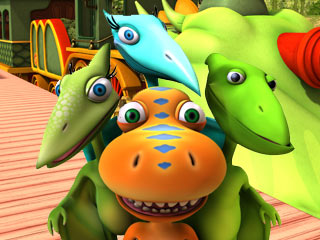 "People, there is an episode with Therizinosaurs doing Tai-chi. There are Therizinosaurs and they are in a cartoon for kids AND THEY ARE DOING MARTIAL ARTS AND THIS IS AWESOME!!! Also, they have feathers."
— Trish Babbles

The show focuses on the adventures of a family of pteranodon and Buddy, a dinosaur who was adopted by them as an egg. Buddy initially doesn't know what species he is, but is determined to find out. To this end, Buddy and his adoptive family go on adventures in - we promise you we are not making this up - a time-traveling train run by dinosaurs. Turns out early on that Buddy's a Tyrannosaurus rex, and he and his family and friends continue having trips through the Mesozoic to "meet all the species".

Train sports strong educational content with a focus on the basics of paleo-zoology, but also a lot of humor and fun. It is a Henson series after all. And even though the main cast is made up of cartoony creatures, the show goes way the heck out of its way to avert Artistic License – Paleontology. It's gained quite a cult following among older dinosaur fans.

Not related to other dinosaur trains you may have heard of.