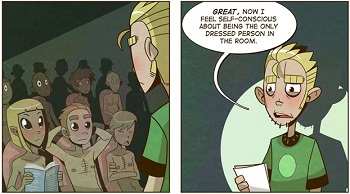 "Don't be intimidated, Squidward! Try to imagine him in his underwear! ...Oh no, HE'S HOT!"
— Squidward Tentacles, SpongeBob SquarePants
Advertisement:

Bob, a shy and retiring man, needs to deliver a Big Speech to a Large Audience of Important People. Hilarity Ensues during rehearsals, until someone suggests that he imagine that the audience is au naturale.

Basically a Stock Phrase, "If you're nervous, imagine the audience naked." A common variation of this is "Imagine the audience in their underwear." This trope is usually played with. Sometimes the viewers at home are shown what the character sees, usually in the underwear variety unless there's some handy scenery — sometimes they will wish they couldn't. Sometimes, there really will be someone naked or in their underwear.

This is definitely not Truth in Television; if this isn't a Discredited Trope yet, it should be. The notion that such a visualization can ease the nerves that come with public speaking is nonsense, as explained in this editorial.

In fact, assuming a speaker is actually capable of vividly calling forth this image under the stressful circumstances of speech delivery, this blog post

does a good job of explaining why it might backfire, especially if you happen to be a young male student with attractive women in the audience. Most textbooks on the subject give advice that revolves around keeping the speaker focused on the actual content of the speech and successful delivery, not something that would be pointlessly distracting.

Subtrope of Naked People Are Funny. Compare and contrast Unaccustomed as I Am to Public Speaking...

I Am a Little Weirdo

King thinks Gus is going to suggest he do something like "Imagine everyone in their underwear" to help him overcome his stage fright, but Gus thinks that's gross.

I Am a Little Weirdo

King thinks Gus is going to suggest he do something like "Imagine everyone in their underwear" to help him overcome his stage fright, but Gus thinks that's gross.