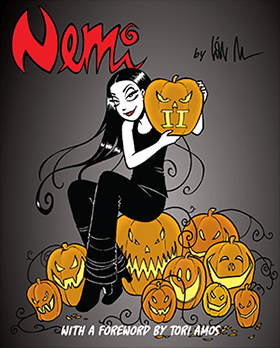 Nemi is a comic strip by Norwegian writer/artist Lise Myhre, starring the titular heroine Nemi Montoya and charts her life and the lives of her close friends.

The comic began life in 1997 as Den svarte siden (trans.: 'The Black Side' or 'The Black Page') before becoming Nemi. Now the strip has its own monthly magazine, and is published daily in newspapers across Scandinavia. It became popular in the UK and Ireland when it was printed daily in Metro, a free newspaper distributed in train stations and some major cities, although Metro dropped all its comic strips in 2015.

This strip contains examples of: