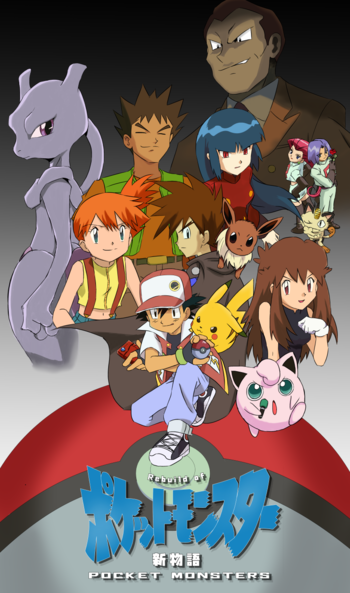 All of the major characters of the Generation I saga, bar one particular father figure. note Original art made by the Author himself

Rebuild of Pocket Monsters: The Animation

is a fan comic that acts as a revamp of the Pokémon anime. The comic is in Japanese, but the artist does have an English-language Tumblr.

The idea of the comic is to make the series closer to Takeshi Shudō's vision: a family-aimed (rather than kid-aimed) work that grows with its audience. The comic also adds a lot of elements from the games.

The rewrite adds a second childhood friend for Ash and Gary named "Sayako". Sayako is based on the original design for a female playable character in Red and Green, which was later used as the basis for both Leaf and Green.