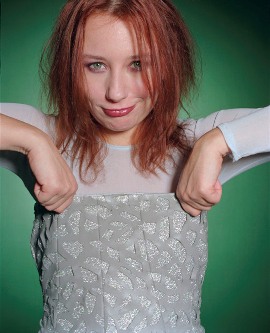 Influences:
"So my father said to me, 'Tori Ellen, I can't believe you wrote this song about me.' I said, 'I write everything about you, what are you surprised about?' He said, 'I'm really hurt by this one.' I said, 'Well which one is it?' He said, 'Well, you called me Satan.' I said, 'No! I was doing drugs with a South American shaman, and I really did visit the devil and, well, I had a journey.' He said, 'Oh, praise Jesus!'"
—Tori, on "Father Lucifer" (VH1 Storytellers)
Advertisement:

said it best about the public's perception of her: "The image of Tori Amos most widely known in pop culture is sort of like an American Björk, a modern Kate Bush, a feminist icon, a screeching, red-haired banshee who flails wildly at the piano and sings all sorts of man-hating anthems for her throngs of similarly screeching, red-haired fans." Note that this description was tongue-in-cheek; she is not misandric, and her fans have a variety of hair colors.

Before she started her solo career, she was in a band called Y Kant Tori Read. Their debut album flopped, and they broke up shortly after. Having to fulfill her contract with Atlantic, Tori made her first, and what most people consider her best, album called Little Earthquakes (1992). Little Earthquakes is considered one of the best albums by a female solo artist. Follow-up album Under the Pink (1994) also earned praise, while her third album Boys for Pele (1996) polarized critics and audiences though it has been Vindicated by History and is now regarded as a classic. from the choirgirl hotel (1998) and To Venus and Back (1999) were also successful. Scarlet's Walk (2002) would be her last album to achieve mainstream popularity, after it ran its course she more or less fell off the radar, though she still retains a devoted fanbase. Generally, her first three albume (Little Earthquakes, Under the Pink and Boys For Pele) are regarded as classics and they along with Scarlet's Walk are her most enduring works. Everything released after Scarlet's Walk is a mixed bag that doesn't seem to made much of an impact outside of her fanbase.

As a person, she is funny, talented, open-minded, kind, and very eccentric. She is known for having an obsession with fairies, and shocking people by breast-feeding a pig and saying things like "I have a 12-inch cock." She's known for having a very devoted fanbase and for being a gay icon.

She co-founded RAINN (Rape, Abuse & Incest National Network), America's largest anti-sexual-assault organization. She tours frequently and changes her setlist almost entirely every time she performs (though she has a few staples, and not just [or usually] the lead singles).