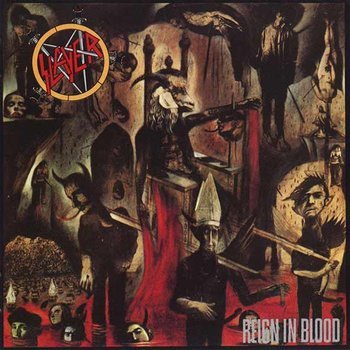 ANGEL OF DEATH! MONARCH TO THE KINGDOM OF THE DEAD!
Advertisement:

Reign in Blood is the third studio album by Slayer, released in 1986. The album began the band's long-term relationship with Rick Rubin (who would produce every Slayer album until the band signed to Nuclear Blast in 2014 and released Repentless the next year) and was their first on a major label — Rubin's Def Jam Recordings, which before was largely restricted to Hip-Hop. It was a Breakthrough Hit for the band, marking Slayer's debut on the Billboard 200 album charts and later their first of four gold sellers.

This album remains Slayer's most successful and (in)famous record, not only due to highly controversial lyrics and cover art but also because it was highly influential music in the metal community. This album combined Slayer's dark thrash sound from their first two albums with the tempos and song lengths of Hardcore Punk to create an extremely high tempo album filled with gruesome thematics and chaotic performances. It quickly became a huge hit in the extreme metal community and inspired bands across all genres, perhaps most significantly on Death Metal. Even today, Reign in Blood is widely considered a thrash classic and one of the best albums ever produced in heavy metal.

The album contains the band's two signature songs, "Raining Blood" and "Angel of Death", the former later being notorious for being one of the hardest things to ever set foot in Guitar Hero. Other popular songs include "Postmortem", "Jesus Saves", and "Altar of Sacrifice". The band has been performed the album in its entirety on more than one occasion, including a DVD of the album Still Reigning.