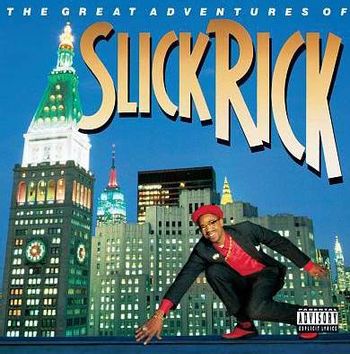 A storybook like no other.
"Knock 'em out the box, Rick. Knock 'em out, Rick."
- From the ending of "Children's Story"
Advertisement:

Slick Rick: All right, you kids get to bed, I'll go get the tablet.

The Great Adventures of Slick Rick is the debut solo album by British-Jamaican rapper Slick Rick, released in 1988 on Def Jam Records.

Expanding on the storytelling concept previously used in "La Di Da Di" ,The Great Adventures is a Concept Album in that the whole album is played out like a storybook, with different tales. Rick also makes use of some common Aesops throughout the album, including relationships gone bad ("Teenage Love"), the consequences of law breaking ("Children's Story" and "The Moment I Feared"), and sexual promiscuity ("Indian Girl"). The album also contains non-story tracks such as "Let's Get Crazy" and "Lick The Balls", among others.

The Great Adventures would peak within the top thirty of Billboard's "Hot 200", and spawned several hit singles. In late 2018, Ricky D announced

that he was re-releasing the album to commemorate it's 30th anniversary in 2019, complete with a behind the scenes booklet, special edition blue vinyl, and clothing. In commemoration, he also dropped a new single: "Snakes of the World Today

Followed up with The Ruler's Back.