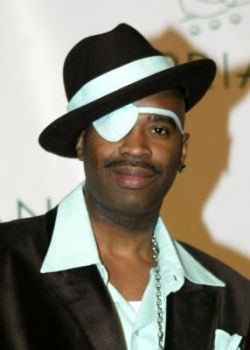 "So listen closely to what I say,
Cuz this type of shit, it happens everyday!"
"When Slick told a story, you know, you was right there. If he was talking about running through the park, you smelled the grass."
- Rakim, on Slick Rick's storytelling skills.
Advertisement:

Richard Martin Lloyd Walters (born 14 January, 1965 in Mitcham, London, England), better known by his stage name, Slick Rick, is arguably the most Troperiffic rapper there is. Hailed by many as the greatest story-teller in hip-hop, his unique Mid-Atlantic drawl and usage of narrative and tropes in his songs are virtually unmatched by any other rapper alive. He's also known for being one of the poster boys of "Parental Advisory": Nobody could push the envelope of the Parental Advisory sticker like he could, and even to this day, many of his songs can still give a media watchdog a heart attack.

Born and raised by a British Jamaican family in Mitcham, Rick was blinded in his right eye by broken glass as an infant, and has worn his now-iconic eye-patch ever since. In 1977, his family moved to Brooklyn, New York, where he met Dana Dane, and would later form a rap group together called the "Kangol Crew".

After that group ran it's course, Rick would gain nationwide exposure after joining Doug E. Fresh's "Get Fresh Crew" in 1985, under the name MC Ricky D. He was featured on the group's single "The Show", and it's B-side, "La Di Da Di", which became a cult hit, eventually earning Rick his first Gold certified single. Three years later, he was signed to Def Jam Recordings, and released his solo debut The Great Adventures of Slick Rick, which became a multi-platinum success, hitting number one on the Rap and R&B charts, and peaking within the top 40 of the Billboard 200.

Rick, however, would not get to enjoy his success for long. In 1990, he shot his cousin and former bodyguard Mark Plummer, after he admitted to having Rick get shot outside of a nightclub. Inevitably, Rick was charged with attempted murder and was initially sentenced to two years in prison. However, due to issues with the government over his immigration status, another three years were added, and he was imprisoned on Riker's Island. His subsequent albums The Ruler's Back and Behind Bars, the latter of which was recorded while still in prison, were met with lukewarm sales and reviews.

After being released from prison in 1996, Rick would renew his contract with Def Jam, and released his fourth (and so far, final) album, The Art of Storytelling in 1999. Considered a return to form to his 1988 debut, it became his highest charting album, peaking at number eight on the Billboard 200. Today, Slick Rick continues to tour worldwide, and volunteers his time to mentor kids about violence.

After more than two decades of legal battles over his immigration status, The Ruler was finally granted American citizenship in 2016

, while also retaining his British citizenship. In 2018, he released his first single in nearly 20 years, "Snakes of the World Today

As we trope a little somethin' like this! Hit it!