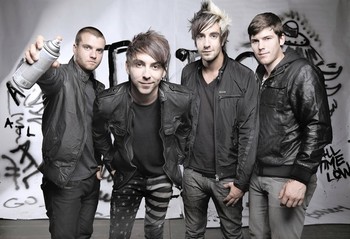 Left to right: Rian, Alex, Jack, & Zack
I'm new to this band...
help me please with the band members and everything..
— ThrashUnreal1000
All Time Low likes bras. If you ever﻿ go to their concerts throw bras up on the stage.
— Taylorisnowhere via YouTube

All Time Low is a Pop Punk band band hailing from Baltimore, Maryland, formed in 2003 with four members; Alexander (Alex) Gaskarth (rhythm guitarist, vocals,) Jack Barakat (lead guitar, backing vocals,) Rian Dawson (drums,) and Zachary (Zack) Merrick (bassist, back vocals.) They're most known for their singles "Weightless," "Damned If I Do 'Ya," and "Dear Maria, Count Me In," and have released 7 full-length albums, 5 EPs, & 2 live albums at current, as well as 2 DVD documentaries filmed on tours.

Tropes featured in All Time Low: